I’m meant to be writing the references list for my Tutor Marked Assessment – a task I find in the same irksomeness continuum as cleaning the toilet, taking the wheelie bins out or pigging out the car after the teenagers have been hogging Macdonald’s in the back, thus I am here blogging by way of avoidance. Last night I went out with my friend Carol for outing number one of her 50th birthday celebrations. She’s planning to really break the arse out of celebrating this august event by doing something different every month for a year. Proceedings kicked off yesterday by six of us going into Cambridge to do a role-play adventure game where we had to cypher our way out of a crumbling pyramid. It

was quite good. Here’s a pic of us after we’d escaped but before we went to the pub. Later, at the pizza place, we  planned what to do next i.e. a trip up the Shard in London. It occurred to me that this would be a great theme for a collection of flash fictions. So when I’ve finally finished referencing and eventually submitted my TMA02, I’m going to start on that. Writing-wise, since I last blogged, I won Horror Scribes Flash fiction 12 Days of Christmas Comp. Here’s the link to my winning flash https://horrorscribes.com/2018/01/05/the-twelfth-day-of-christmas-and-overall-winner/#more-1157

and here’s a pic of my story on a mug which I’m dead chuffed with.

It only came yesterday so I haven’t yet had a brew in it. Will get grumpy husband to take a photo of me tomorrow having tea and biccies then I can put it on my next post. What could be better than flash fiction and a brew? Right better press on for this is buttering no parsnips nor referencing no influences. Oh yes one last thing. Next week I’m doing Fast Flash with Kathy Fish. Will blog anon. Soooooo excited. 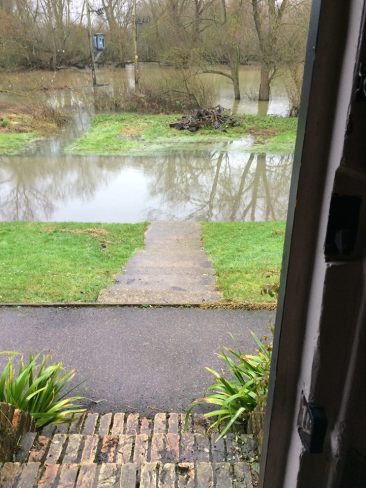 As its been 2018 for four days, and as this is the view from my liminal front door, I thought I’d better post a blog to commemorate the occasion. The road is often a river as I live on the Cambridgeshire flood plain, but I never worry because my 400 year old cottage has flooded only once according to local tradition and that was in the big flood of 1947. Even then we came off least wet as we sit quite high on an ancient bank. The nearest it ever came to coming in, in my time, was in 2004 when it lapped the edge of the top tarmac path. I almost bought sandbags that year. Anyway, back to more mundane ramblings. I was sick over the festive season and mostly chucked up when the family festivities were underway in my kitchen. Never-the-less, I got to see the family and some friends which was lovely. To link clumsily to the image above, I find myself in a liminal headspace at the moment. Its my birthday next week and though I’m proper fed up with eating and drinking (despite the norovirus incident) I know that I’ll have to give it another fling when the birthday comes along. We’re planning a trip to a local carvery which is more for the family than me as I’m veggie. Anyway, the prospect of yet another blow-out hovering on the horizon, has me Hoovering up (by which I mean eating) leftover dark chocolate brazils and sad unwanted edible tree decorations and the like because there’s no point in starting the inevitable January diet until the carvery’s done and dusted. I know, lazy self-indulgent, contradictory thinking, but at least I’m making myself walk/swim off the hogged choccies.

Writing-wise, I’m on a threshold too. I am so excited I could barely withhold the revelation to here but..

.drumroll/big tah dah, I’ve booked myself on Kathy Fish’s Fast Flash on-line course. (Its my birthday present from grumpy husband and starts on the 22nd Jan.) Will blog about it in the fullness of time. I am so excitied. I just love her work and several of the on-line flash fictionistas have recommended it in such glowing terms, I just had to. Also I’ve been very lazy with flash fiction since I started my MA and it will get me kick-started for the year to come. I’m currently writing Tutor Marked Assessment 2 (only a working title) for my course, which is in the workshop for peer feedback until 10th January, so a wee bit liminal re that too at the moment.

One thing that’s not borderline or in any way marginal, is the Flash Fiction Festival Anthology pictured above on top of one of the fireplaces, (where is matches the décor.) I’ve read it now and it is so very good. The contributors read like a who’s who of the flash fiction world (even despite my inclusion.) I feel very blessed to be included amongst writer who I so admire.

I was going to finish with some aims and objective for the coming year, but quite frankly such unexpected stuff occurred last year that I think I’ll just hold on tight and hope for the best. Happy New Year peeps of the bloggis-sphere, hope its not going to be too much of a rocky ride, or that if it is, I hope its good rocky, not pants rocky.