Feels like an age since I last wrote this blog in my girl shed up the garden on a quiet afternoon. Since I last did, I have:

Been to Cartmell races for a weekend with the Kaneen clan and lost £70 without getting a first second or third placing in any of the seven races. Pretty good going that and a shame you don’t get a prize for picking losers. My feminist strategy of betting only on pink shirts and lady owners did not pay off this year but it will one day I’m sure.

Been to the Test Match at Old Trafford – which was brill, England getting two centuries and the weather cracking the slabs. Even got a bit of colour on my pasty ‘staying inside writing,’ skin.

Saw Salford Red Devils in Salford get beaten by Hull but they played really well and it was an exciting match.

Been to Dublin on a hen night with the Bolton and Dublin ladies who could quite frankly drink both Salford Reds and Hull rugby league teams under the table.

Seen bessie mate Clarey win her first ladeez boxing match in Wakefield. She won by a county mile despite being one of nicest people you could ever meet. It was an eye opener seeing her hitherto never suspected raw aggression coming to the fore as she marmalized (is that a word) the opposition.

Swum half a mile each day for the last six days.

Had an interview published on Bath Flash Fiction Website. (I interviewed the editors of Molotov cocktail.) Here is a link to it in case you fancy a read. http://bathflashfictionaward.com/2016/07/the-molotov-cocktail-a-projectile-for-explosive-flash-fiction-interview-with-josh-goller-the-brain-behind-the-mayhem/

Things I haven’t done in the last three weeks include:

Writing any more of my novel.

Writing much at all

There’s a pattern there and its making me jittery all this not writing so I’ve legged it oop the garden now the shopping and swimming is done and started with this before I need to go and cook dins for the ravening hoards then will then move on to my ‘flash in progress.’

Just before I jog on, here’s the photo of me  at Chester Uni getting a copy of Patches of Light from the High Sheriff as mentioned in previous post. Have a full on night and tomorrow planned so might not get chance to write again until Monday. 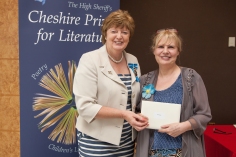 Had a wonderful night on Wednesday at the launch of Patches of Light at Chester University. My story the Time Travellers Daughter is in it. Here’s a link in case you fancy getting a copy.

It was fab to meet the writers and staff in such convivial surroundings. There was wine, bookish chatter, readings and photos. Here’s one of us all gathered at the end. There were individual ones too as the High Sheriff presented us each individually with a copy of the anthology. I’ll post mine when it arrives. I found the best bit of the evening to be sharing writing experiences with two of the contributors Mary and Andrew. It’s so weird putting faces and people to the tales they wrote. I’ve read half of the anthology so far and the stories are so very good I feel privileged to be included. Anyway the whole experience has filled me with enthusiasm to get cracking with my many ‘in process’ stories to get them finished and polished for sending out. Writing is such a solitary practice (in the real world not in cyberspace) so its great to see the results of the solitary making ripples in the real world.

This is a random picture of me drinking an ice cocktail. Its here for no other reason that I’m teaching myself how to insert pictures. Mission accomplished then. Anyhoo, a wee while ago Jude Higgins, the talented Flash Fictionista

behind The Bath Flash Fiction Award, asked me to do an interview with Josh Goller who edits Molotov Cocktail for the newsy bit on the Bath Flash website. I did and its now finished and ready to go so will put a link to it here when its up on their site in the next two weeks or so. Josh sent a brilliant photo yesterday for inclusion with the piece (mental note to self – sort a pic out of myself too and a wee biog when I’ve finished this.) The photo from Josh is genius and so funny it made me laugh out loud. You’ll see what I mean when I put it on here after its published. Mine will be more rubbish.

Its very weird writing biogs about yourself in the third person like you’re someone else.

You have to write something like this: Jan Kaneen is a student at the OU signed up to do their newborn MA in Creative Writing starting in October 2016. She is trying to build an online tribe of Twitter followers for when her novel’s finished.  She’s been published here and there and has, like every other aspiring author on the planet, been short-listed for this and that and won some competitions.

Yep might have to work on that a bit!

Looking forward to going to Chester tomorrow for the launch of Patches of Light which is an anthology of short stories from last year’s Cheshire High Sheriff’s Literature Award which  I was short listed for and have a story included in. My story in called The Time Travellers Daughter. Here’s a link to the flyer.

Some of the writers will be reading extracts at the event so hope this cold that I managed to develop overnight doesn’t get any worse or I’ll sound like Balcolm from the old Tunes advert.

Writing this dead quick before taking Harry to football to make sure I get it done. Clarey just left after a lovely morning and evening. Curled her hair for her because she’s going boxing in Wakefield which is a really weird confluence of opposites. I’ve never curled hair before but she has a genius gizmo she brought back from Canada last year that does it for you and I managed not to set fire to her though the smoke/steam – not sure which – was a bit disturbing. My idea of doing you hair is blow-drying your fringe before you put it up, wet in  a claw clip.

The Shakespeare last night was fab though Prospero kept forgetting his lines. That’s all part of the charm with local productions I reckon. Miranda was properly brill and Ariel was weirdly effective. Dins was lovely too and the rain spotted not poured. Its weird with outdoor theatre how the mood changes from light and open when in the daylight to dark and intimate as they night closes in. Lovely to see Stuart who we’ve taken to the show for two years now.  He used to go with Clare’s Uncle Podge,  for twenty years or so (they were best fiends.) Podge died two few years ago and at his funeral we arranged to take Stuart to help him grieve. Its become a ritual with the doing it again this year.

They say that next year they’re going to do Pericles which doesn’t seem like the obvious choice for a small amateur troupe in the fens but we’re definitely going to go just to see how they manage with it.  Right off now with a light heart knowing that I finally made time for my blog.

Back on the blog then after yet another hiatus caused, this time by George’s illness. This is the short version of what happened – he was admitted to hospital which was very traumatic, put on drips of antibiotics, morphine and steroids because his tonsils exploded with a secondary infection. He came home  after a couple of sleeps, got very ill again, finished another course of antibiotics but the throat infection came back, got put on another course of antibiotics then caught another virus (doc says this is common when your immune system is weakened by the glandular fever) and has just, in the last couple of days, started to feel betterish – though he’s still completely knackered.

Didn’t therefore get my poems into Molotov cocktail in time for the deadline or enter the story I’d written to Retreat West for their themed flash comp ‘Riches’ (slept though deadline.) Hey ho – will hold them until something relevant comes up because I’ve re-read them this morning and I think they’re ok.

Did get my piece ‘We’re Going to Pick Daddy Up’ into the Flash Flood for National Flash Fiction day though so that was good. Make note to enter a story next year for potential inclusion in their anthology.

Off to Shakespeare at the George for dins and The Tempest this evening, in the outside Courtyard with Clarey and Stuart. Sky looks like thunder so it should be interesting. Intending to always blog from now onwards. Hope nothing happens to scupper my plans.